HI! DO YOU WANT TO BUY ONE OF MY CLOCKS?

The numbers on this clock are a futuristic-looking numerical system called base-twelve. Base-twelve is exactly like how we normally count except instead of counting in tens, we count in twelves. The explanation of why it is great to count in twelves is a bit long, but it is entertaining, I think. I put that below. If you like weird ideas that make some people SO MAD, you'll like reading it.

If you are already in favour of a futuristic society where everyone counts in twelves, then feel free to order one of these great clocks. I really hope you do order one.

Okay, now for the fun part. I get to try to explain one of my favourite things...

The one thing in the whole world that we've all agreed on isn't that great of an idea.

The simplest way to write numbers is to use just one symbol. If you are a cave person, you could draw five lines on the wall to represent five buffalos you saw. If you are an anatomically modern human playing bean bag toss at the lake, you could use a tally mark to represent one point in the game. Each line represents just one.

But it becomes difficult to interpret the count at a glance when it gets higher than four or five. For example, what number is IIIIIIIIIIIII?

If we group the lines into fives we can see at a glance that the number is thirteen:

The additional complexity of crossing every fifth line over the last four lines plays to a strength of our brain. We are good at interpreting symbols. We see each of the little gates not just as five individual lines, each line symbolizing a value of one, but also as a single unit: a symbol for five. It is a strong system and it is still used today by many people marooned on desert islands.

Here we've moved away from a direct relationship between the count and a number of lines. Significantly more brain power is needed to understand the additional abstraction. Rote memorization is needed. But it's child's play for humans. Or, at least if you force a child to learn it, she or he will.

At first you'd think if we wanted to use these symbols to represent fourteen we'd write two of the characters that represent seven: "77". Seven and another seven make fourteen. That wouldn't be bad, but the problem is it requires arithmetic to interpret. The solution, another layer of abstraction in our numerical encoding, was one of the most significant breakthroughs our species has ever seen.

The way it works is we assign different meanings for our numerical symbols depending on what position they occupy in a string. For example, in "107" the funny looking acute angle thing represents seven, but in "701" the same shape represents seven hundred.

The encoding is interpreted by looking at the columns in these strings from right to left:

This should be review for all the Grade One grads out there.

It takes up a lot less space than cave people tallies, vastly simplifies arithmetic and works well for counting old school on ten-finger monkey hands, nature's abacus. It's an ingenious system used everywhere across the entire world. Its ubiquity is truly remarkable: there aren't too many other things we all seem to pretty much agree on.

But there's a better way.

Instead of counting in tens, we should count in dozens.

As you can see, we've added two new symbols. One for ten and one for eleven. We're using X and E because X is like the Roman Numeral and E because it's the first letter in eleven, but we could use a fishing rod and an axe instead if we wanted.

Adding the X and E give our boring old numerical alphabet a fresh new look, but like all enduring systems or designs, the aesthetics are way more interesting if there's a functional excuse for it. And here it is...

Why it's nice to work with twelves

How ten breaks down:

Not a great showing for the number we've chosen to use for all of our math.

How a dozen breaks down: 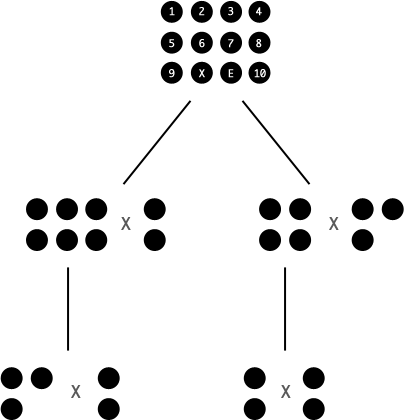 Counting in your head

It is super easy to count up by 2s or 5s when we are using base-ten. Because of what's illustrated in the above diagram of ten breaking into 2's and 5's, we get these nice patterns:

But it's even better in base-twelve. Instead of having this benefit only for counting by 5's and 2's, in base-twelve, it will be equally easy to count in 2's, 3's, 4's and 6's (because they all divide evenly into twelve).

Imagine an analog clock face. Or just look at my drawing here: 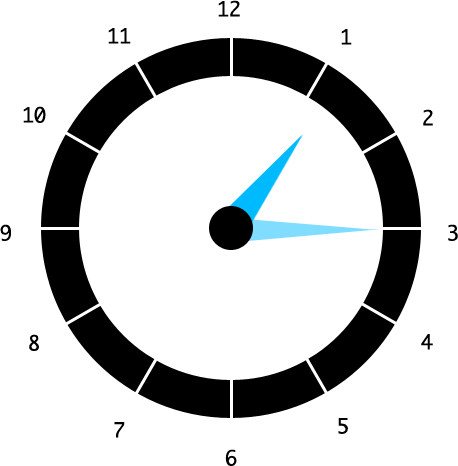 If we are thinking in base-ten, we would look at the above clock and see we are at 1.25 hours, a quarter past one. 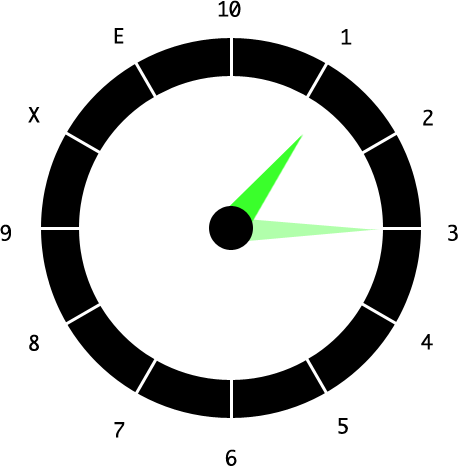 The symbols have changed, but the concept of the hour being divided into twelves has not.

Here are some famous fractions in base-twelve and in base-ten:

Base-twelve is better optimized for the pie slices we like best. Base-ten is good for fifths though. So if you ever need to divide a pie into 5 pieces, use base-ten.

Adding fractions in your head:

Carpenters, graphic designers and quilters all gravitate towards twelves. Here are some examples of why:

There is a principle in design called The Rule Of Thirds that says that thinking of your design in three columns tends to work pretty well. We can do that easily with the twelve grid, of course. 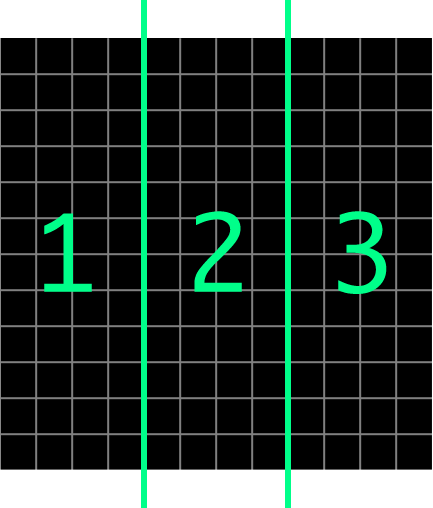 Thirds are not possible on a ten grid.

Okay, but what if we want to work in quarters? 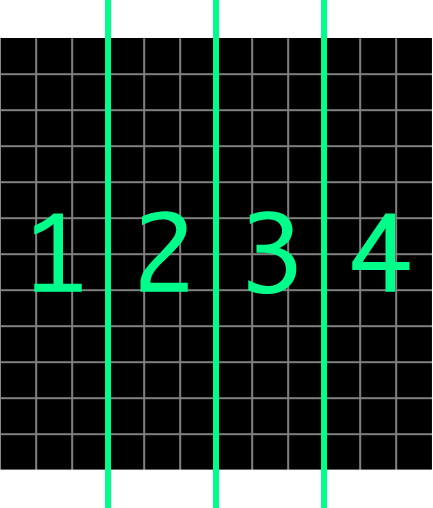 Unfortunately, quarters are not possible in a ten grid either.

We use two base units for time:

Both units are sub-divided into twelves: days into two groups of twelve hours, years into twelve months. 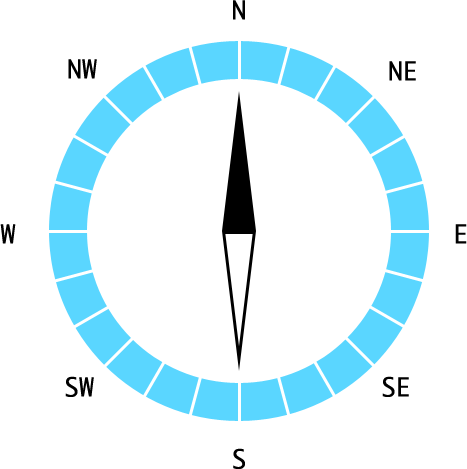 Twelves work well for circles, as in the clock.

Why do we use a numbering system that optimizes for the pentagon?

There are two dimensions of music: pitch and time. In the music we are used to, both are in twelves or factors of twelve.

The rhythm for almost all the music you hear has four or three beats per measure. It is hard to do-si-do to a song counted in fives.

Pitch is like a spiral staircase. You can continue to climb in pitch but you keep returning to the same note.

An even better way to visualize musical notes is our trusty analog clock: 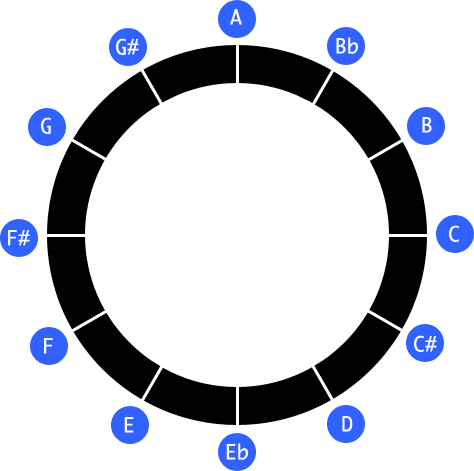 Why music is in twelves is another story for another time.

So many other reasons

There are twelve animals on the placemats at Chinese restaurants. There are the Twelve Days of Christmas with twelve drummers drumming. No one wants a pack of ten hamburger buns. No one! A half-dozen doughnuts are a better deal than five individual doughnuts. Plus, there's this song from Sesame Street:

Counting on your fingers

So why do we count in tens? Anthropologists think it's because we have monkey hands. We like to count up to ten on our monkey hands.

But take another look at your hands: 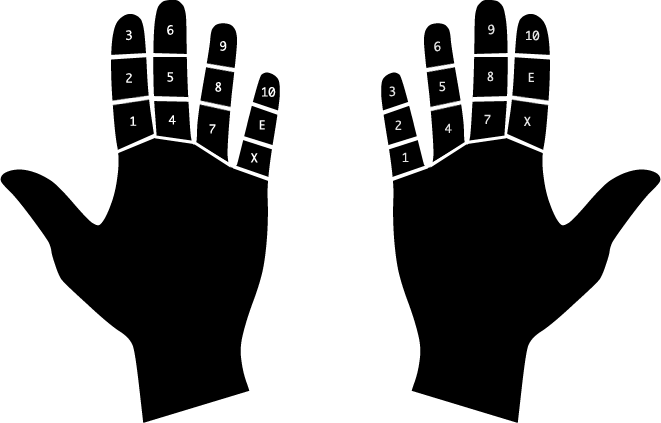 So anyway would you like to buy one of my clocks?